The intrinsic charm of the proton

A NNPDF collaboration study led by UNIMI and INFN published in Nature resolves a 40-year-old scientific dispute about the charm quark. 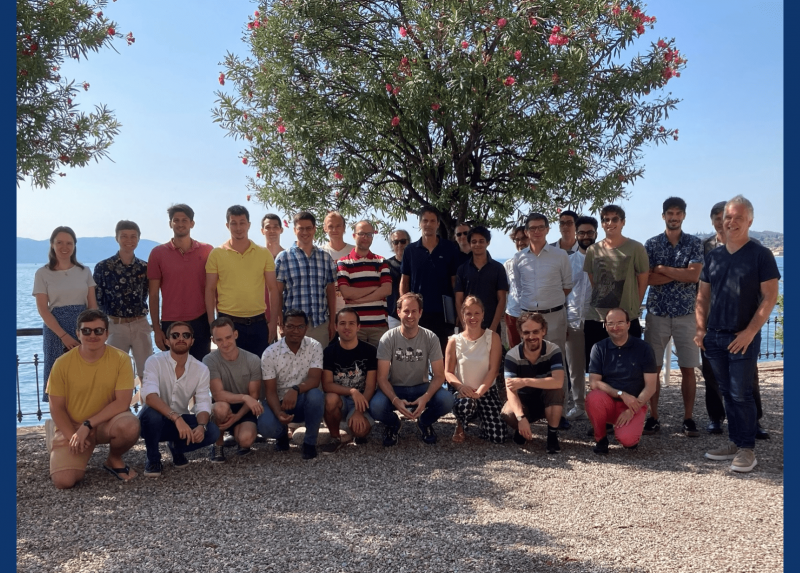 Participants in the NNPDF meeting and N3PDF project in Gargnano

A new study by the NNPDF collaboration (Neural Networks Parton Distribution Functions) led by the University of Milan and the Italian Institute of Nuclear Physics (INFN) has shed light on a surprising characteristic of the structure of protons. Published in Nature, the study has determined that charm quarks, along with the lighter and better known up quarks and down quarks, are intrinsic components of these subatomic particles, proving a hypothesis developed over 40 years ago. This result was achieved by adopting innovative machine learning techniques, which were able to analyse and resolve the huge amount of data produced by particle collisions. In addition to improving our understanding of the structure of the proton, still poorly known, the study contributes to a more accurate theoretical description of collisions among these particles, thus increasing our ability to observe signs that push the boundaries of physics.

The simple representation of the proton as a particle composed of only two quarks, an up quark and a down quark confined and bonded together by the reciprocal exchange of strong-force carrying bosons, i.e., gluons, ignores the presence in the proton of an infinite number of pairs composed of quarks and their antimatter counterparts, antiquarks. This complex composition changes in proton collisions with increasing energy, and thus with the reduction of the scale of measurement. This new hypothesis is supported by quantum chromodynamics, which is the leading theory for the description of the strong nuclear force.

“Based on experimental data,” explains Stefano Forte, INFN researcher and docent in the Aldo Pontremoli Department of Physics at the University of Milan who leads the NNPDF collaboration, “and using quantum chromodynamics, we are able to indirectly resolve the internal structure of the proton at rest. The principal challenge of this procedure is the inherent factor of uncertainty in observations of particles produced in collisions and the approximations that must be made to make calculations possible. If these approximations are not handled correctly, they could produce conclusions that are skewed by the initial subjective assumptions.”

In 1980, the physicists Stan Brodsky, Paul Hoyer, Carsten Peterson, and Noriskue Sakai formulated the hypothesis whereby charm quarks, which have a mass greater than that of the proton itself, could have been one of the intrinsic components of these subatomic particles at rest, and thus should not be confused with the heavy quarks radiating from high energy collisions among protons. This idea has been the focus of scientific debate for more than 40 years, now resolved thanks to the NNPDF collaboration and the development of cutting-edge analysis methodologies that have proven able to overcome the theoretical and experimental limits regarding determining the internal structure of the proton.

“This result was made possible by the use of new, very recent data” adds Forte.

Felix Hekhorn and Alessandro Candido, post-doctoral fellow and doctoral student, respectively, at the University of Milan, underscore that “a fundamental role was played by the use of theoretical advances that are the fruit of our collaboration and make it possible to unambiguously separate the intrinsic component from the radiative component.”

Juan Cruz Martinez, post-doctoral fellow at the University of Milan, observes that “the most important thing was the development of a methodology based on machine learning that makes it possible to extract information in a particularly efficient manner from the data.”

The determination that the proton has an intrinsic charm quark component will have significant implications both for the study of the properties of the proton and for physics beyond the Standard Model, the theory that describes elementary particles and their interactions. “On the one hand, the charm component that we have identified will be included in calculations of physical processes that occur when protons collide and influence the outcome. It will thus have a impact on precision physics, such as the measurement of the parameters of the current theory, and as a consequence, the research deriving therefrom, such as the search for candidate dark matter particles. On the other, it provides us with important clues for calculating the structure of the proton based on quantum chromodynamics, which is both difficult and elusive,” concludes Forte.

The work of the NNPDF collaboration has been made possible thanks to the results obtained by N3PDF, a research project, again coordinated by Forte, whose principal objective is to develop a methodology based on the modern techniques of machine learning to determine the structure of the proton. In 2016 it received an advanced grant from the European Research Council. The methodology developed by N3PDF is now systematically applied by NNPDF. All methods, results, and codes of both projects are open source and freely available to the public.

The international NNPDF collaboration, including nine universities and research institutes in six countries, is now one of only three bodies on the world level dedicated to determining and updating measurements regarding proton structure.

In late August the annual meeting of the NNPDF collaboration and the N3PDF project took place at Palazzo Feltrinelli in Gargnano on Lake Garda, an opportunity to discuss new ideas and future developments, with the participation of a number of international guests, including Wouter Verkerke, from the Dutch national laboratory NIKHEF in Amsterdam, and Alexander Huss, from CERN, Geneva.

Link to the study published in Nature.