The great road trip stops in Milan: a journey by 2CV for treatment of Kennedy’s disease

On 18 July, the legendary Citroen 2CV that has driven across two continents to promote knowledge of Kennedy’s disease (SBMA) arrived in Milan, stopping first at the Town Hall and then at the University of Milan for a scientific seminar. 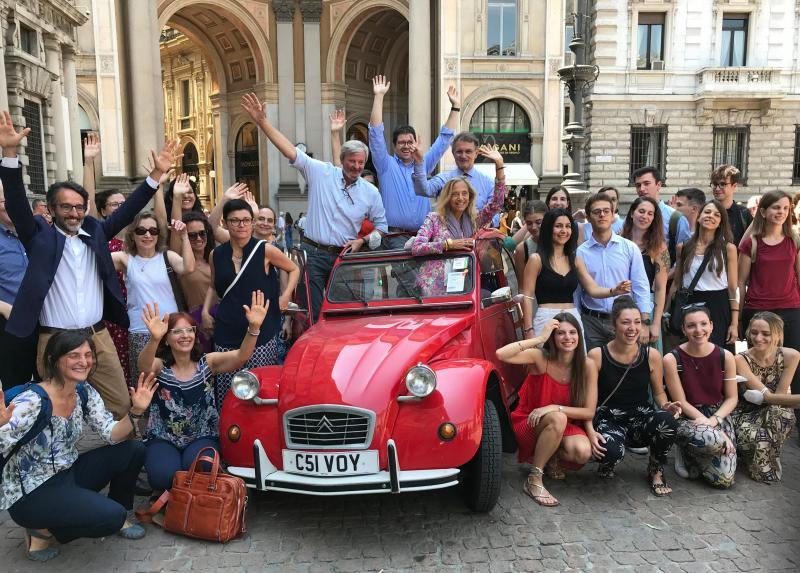 On 18 July, the Citroen 2CV that is making its way across two continents, from North America to Europe to promote knowledge and scientific research on Kennedy’s disease (Spinal and Bulbar Muscular Atrophy – SBMA), arrived at Palazzo Marino, Milan’s Town Hall, in Piazza della Scala, where it was welcomed by the Commissioner for Welfare and Health, Lamberto Bertolé, by Deputy Rector for Research Coordination and Promotion of the University of Milan, Maria Pia Abbracchio, and by a team of researchers.

The 2CV, driven by volunteers with SBMA patients as passengers, set out from Los Angeles, travelling the legendary Route 66 on its way to New York. After embarking for London, it crossed the Channel for a stop in Paris before initiating the final leg to Rome, where the American (KDA) and British (KD-UK) SBMA patients associations will meet their Italian counterparts (AIMAK).

SBMA is a rare genetic disease that causes progressive neuro-muscular degeneration resulting in weakness and muscle atrophy, especially of the limbs and of the muscles used in speaking and swallowing, drastically compromising patients’ quality of life. SBMA is associated with a mutation in the androgen receptor, which is situated on the X chromosome, and thus affects only males, while females are asymptomatic carriers of the mutated gene. It is estimated to affect 2-3 out of 100,000 males but is often misdiagnosed. There is currently no cure or treatment, and it is thus essential that basic, pre-clinical, and clinical research be promoted.

“This encounter was inspired by the journey of the 2CV from Los Angeles to Rome, which also represents the long journey of research in all its stages,” relates Angelo Poletti, coordinator of the Laboratory of Applied Biology and researcher of motoneural diseases at the University of Milan, “from its beginning in 1968, with the first description of the disease by Dr Kennedy, who distinguished it from the various forms of amyotrophic lateral sclerosis [a.k.a. Lou Gehrig’s disease], which it closely resembles, to 1991 and the identification of the gene responsible for the disease. This was a great achievement, because it was the first mutated gene associated with a neurodegenerative disease to be identified, opening the doors to research on numerous other pathologies of the central nervous system. The study of the molecular basis of the pathology was coupled with clinical efforts to assemble a register of cases of Kennedy’s disease. Initiated here in Italy by physicians at the Carlo Besta Neurological Institute in collaboration with their colleagues in Padua and Rome and funding by Telethon, this register then served as a model for similar work in the United Kingdom, France, the United States and then gradually the rest of the world. All these stages are very closely intertwined among Italian and international laboratories, in the conviction that this strong collaboration will final bring us to the end of the journey, i.e., to the discovery of a therapy or a treatment for this crippling disease. We hope that, as the song says, ‘we too will reach Rome’ …" (L’amore non ha padroni, Antonello Venditti, ndr).

“Fondazione Telethon has been working on Kennedy’s disease for a number of years now, achieving concrete results, which make us proud of the effort we make every day on behalf of patients affected by this rare genetic disease,” states Anna Ambrosini, Senior Research Program Manager for Fondazione Telethon. “Seven researchers have been involved in eleven projects with funding of 1.903 million euros. The teams have been working on two different but complementary paths, which include basic and pre-clinical research to expand our knowledge of the disease and identify potential therapeutic approaches, and clinical research, to plot patients with SBMA in Italy, gather information on the natural history of the disease, and prepare future clinical trials.”

The 2CV reached the University of Milan in the afternoon for a scientific seminar involving patients associations, the research teams studying the pathology from the universities of Milan, Padua, and Trento and from the Carlo Besta Institute, physicians involved in treating patients, and Fondazione Telethon, which, along with KDA, has funded research into Kennedy’s disease in Italy for years.

“The Great Road Trip is a model initiative, illustrating how listening, dialogue, and interaction among patients, scientists, and citizens can generate empathy and awareness and contribute to advancements in research. The shared work on the disease creates lasting collaborative relationships and promotes the development of an active, vital, participatory society where everyone makes a contribution, with benefits—at times unexpected—for all,” concludes University of Milan Vice Rector Maria Pia Abbracchio. 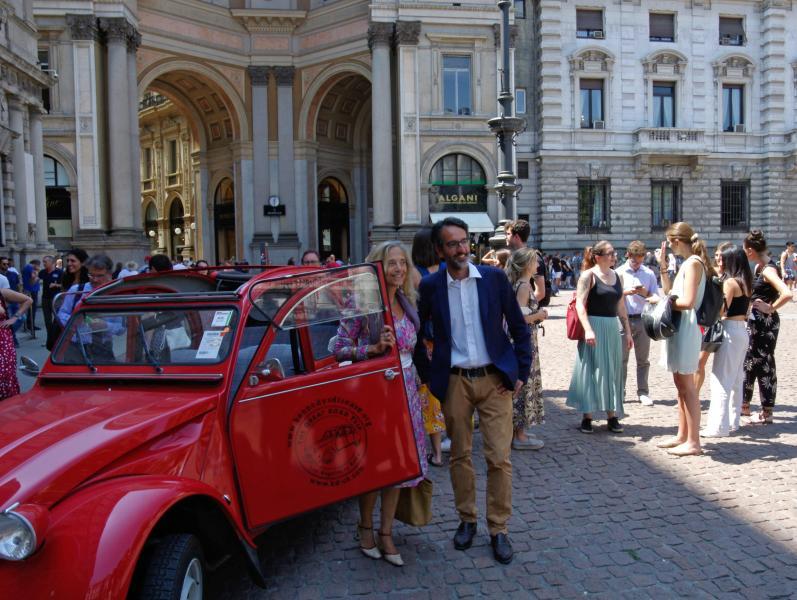 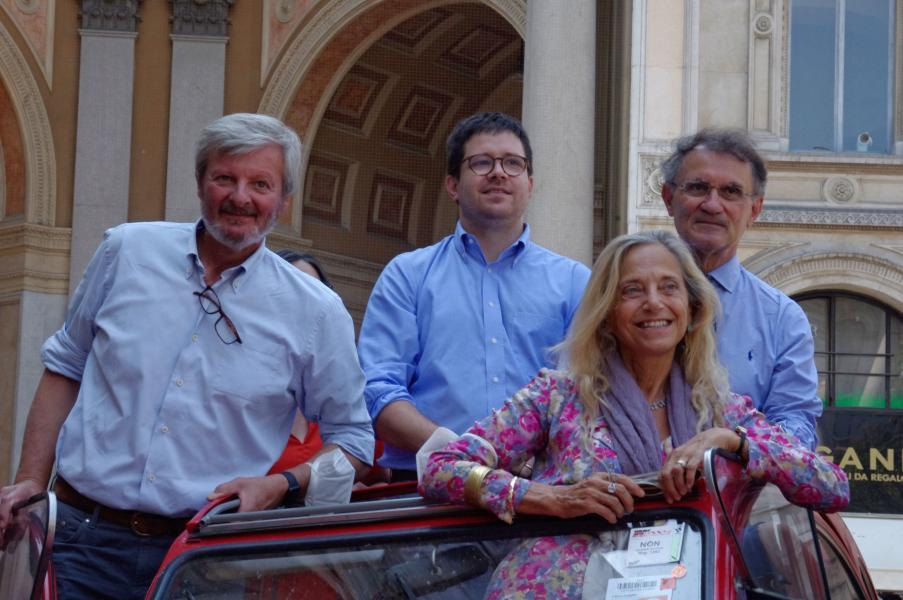 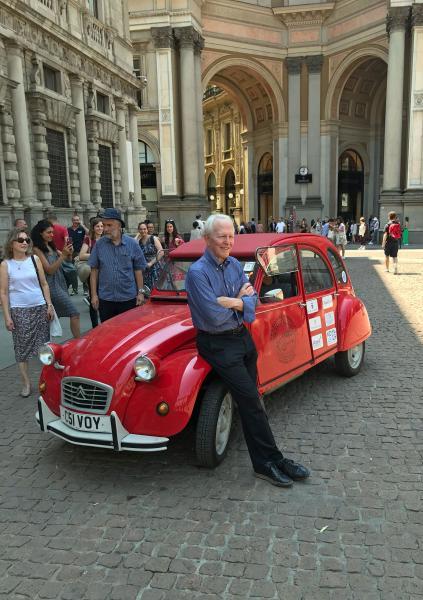 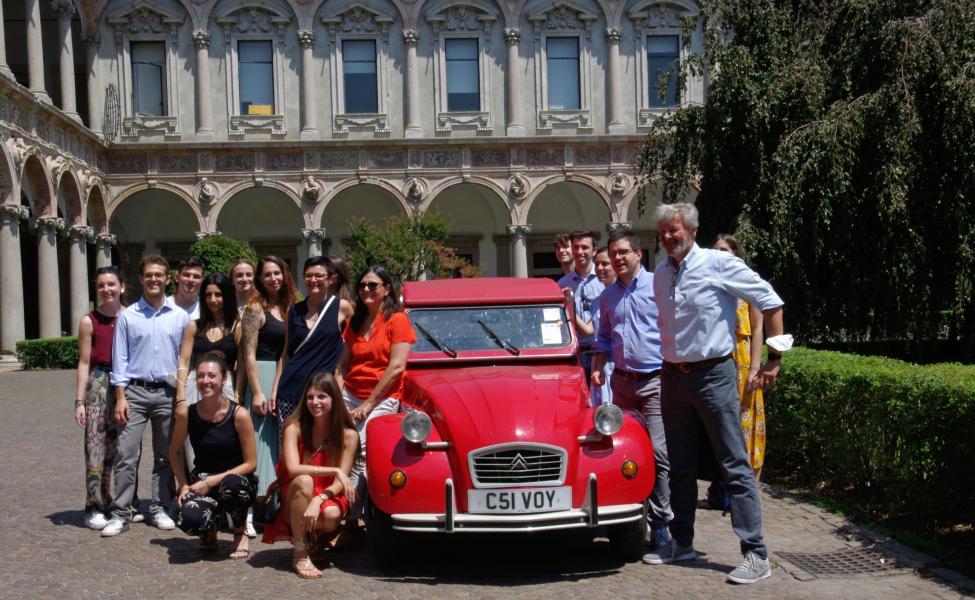 The research team posing after the arrival of the 2CV in Via Festa del Perdono, seat of the University of Milan 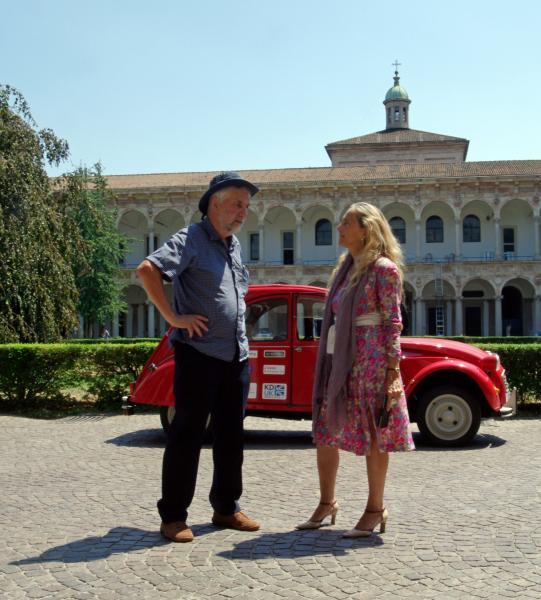 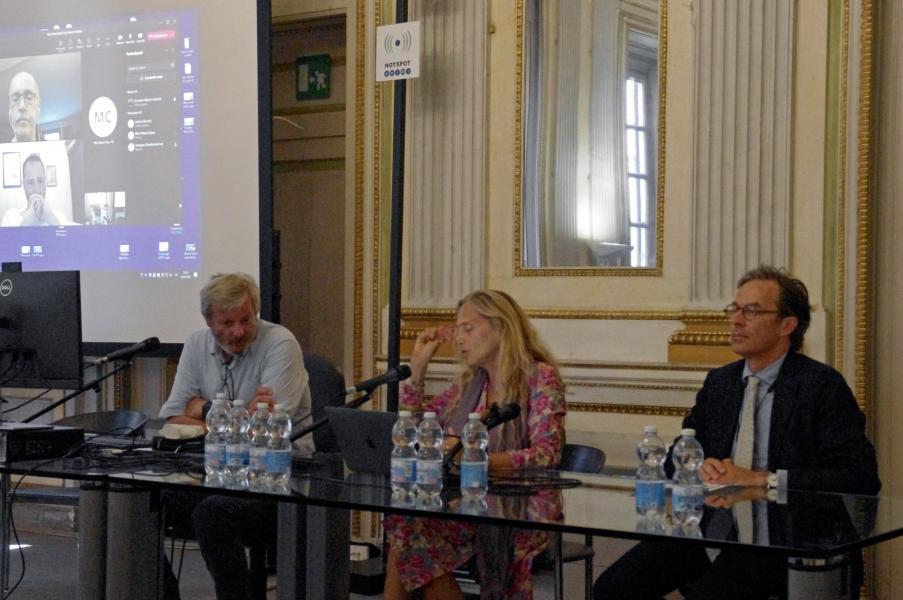